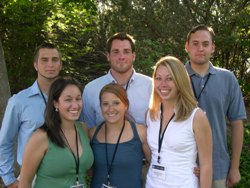 Six ES students went on to present this research at the 12th International Symposium on Society and Resource Management, held in Vancouver, Canada in June 2006.  At the conference, the students received the Runner-Up Award for Best Research Poster (see photo).